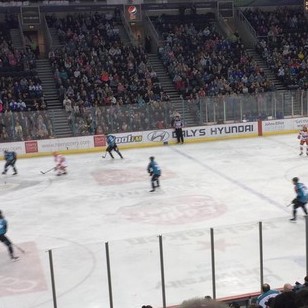 The first day of our trip was spent with the families hosting us. A lot of us started out the day with a brunch : bacon, eggs, croissant, waffles, typical Irish bread, fruits…
Then, during the afternoon, some people attended a hockey game : Belfast Giants against Sheffield Steelers. Belfast won 5-1. Others went to an Escape Room, a somewhat stressful but very funny experience. One group did it out on time and the other didn’t. Other activities in the day consisted of walks in the center of Belfast, at St George’s Market for example, or even in border of the sea.
Lastly, a few students visited museums, to learn more about northern Irish history and culture.
Most of us ended the week end watching a movie with the family.

On Tuesday 25th we met at school at 8:40. On the morning we did a tour of Belfast with a bus and saw the murals. We discovered that there were a lot of tensions between Catholics and protestants and they still exist today. People painted on walls to express their opinions about the “war”and this is was a sort of propaganda. Moreover, we noticed that some district are catholics and others are protestants. We saw that by looking for clues for example the union jack flag in the street of pro-England district or the irish flag in the pro-Ireland ones. Or sometimes they were just separated by a wall. After that, we drove to the peace wall and wrote our names on it. At 12am, we went to the town, we ate in front of the city hall.
Then we had « free time ».
We could do some shopping or spending time chilling, drink something, walk around Belfast center,…
We did some nice shopping in Primark, urban outfitters, souvenirs shops, donuts shops,….
And then we went back to the school at 15.15 , and back to our partners houses

Our day 4 in Northern Ireland.
On the morning we went to class with our partners until 10:15. Some of us and our teachers enjoyed Mister Brittian’s French class. We saw how Northern Irish students are properly studying our langage and we enjoyed helping them with prononciation and conversation, and ended up talking about the « yellow jackets ». After that, we went by bus to Queens University, in order to visit Ulster Museum. It was quite interesting, especially the part about « the Troubles » and all the natural part showing dinosaures’ fossils. We didn’t have much time inside but enjoyed it. Some of us took the time to go the botanical garden, full of beautiful plants and flowers. Later on we had a quick lunch and went to visit Stormont, also known as the Northern Irish Parliament. Our guide was very nice and answered all our questions. We were particularly intrigued by the fact there is no government. We also got to seat at the representatives’ places or in the exact room used by the Royal Air Force during the WW2.
To finish our day, we went to Holywood Beach to get some fresh air, windy hair, childish games and beautiful photos. We took the bus again to go back to school, to meet our partners. We all got back home, eating early as usual and doing some nice activities, such as restaurants, shopping or cinema with our hosts families.

Today on Wednesday 27th of March, we went to Giant’s Causeway, it is located two hours away from Belfast. There we walked on on trail along the shore and ate. This same shore is full of stones. They have been eroded through time, that is why they have such a particular shape.
We learned that a legend says that a giant (Fionn Mac Cumhaill) built it to protect Ireland from enemies.
The reality is different, million years ago there was a big lava explosion, a big “plateau” emerged, as it cooled, the expansion and contraction of this plateau formed the columns we now call the Giant’s Causeway.
On our way back home, we stopped at a town called Portrush. There we had some free time where we split up. A part of the group went for an ice cream while others walked along the beach.
This day was a beautiful day, we all had a lot of fun. The Giant’s Causeway is a wonderful place to visit and is surely a “must see” in someone’s life.

Thursday was the last day in Belfast with our partners. We first went to school and then had classes with them. After that, we took the bus to go to the center of Belfast. We had some free time there and ate our lunch. We had an appointment at the Titanic Museum at 12:45. Then we visited the museum. It was very interesting and great. We came back to school at 15:25 and went to our houses. In the evening, we met and had pizzas and did a bowling. This moment was very good and friendly because it was the last night before our comeback to Mulhouse.